The following is an excerpt from Diane’s upcoming novel, Until Proven Innocent.

I’m just a writer. But many years ago, when I became discouraged and gave up teaching in the Chicago Public Schools, I thought maybe I could be a doctor or a cop and do someone some good. I hadn’t been able to do much of that as a teacher despite how much I had liked working with the kids.

After I started a microbiology class at a junior college, a professor who was not too much older than I was, told me when I could go to the bathroom. I promptly decided that I wasn’t going to make it through all that additional schooling after all and I dropped the class and applied to the Chicago Police Department.

I was called in for an initial exam and I passed it. By the time they got around to notifying me that they wanted me to come in for the next step, I had already left Chicago for my next adventures and the idea of becoming a cop disappeared from my plans.

Good thing, too, I thought that afternoon, when I found myself standing in a morgue next to a table bearing a forty-three year old homicide victim. I found myself looking into the blank, staring eyes of a body that was void of any life force. The body was caked with dried streams of blood from a multitude of stab wounds to the chest, but that was the easy part.

The man’s face still bore the kitchen knife that his enraged lover had plunged into him just above his cheekbone. They were not going to remove it or wash the blood until the autopsy. This was being delayed while it was determined if the victim, whose body parts they had to remove, examine and weigh, was HIV positive or not. It turned out that he was HIV positive. There was no autopsy done on that body.

Then I was shown a refrigerated room for preserving these inanimate pieces of meat on metal rolling tables, in body bags or under white sheets, sometimes for days or even as long as months. The smell wasn’t too bad, mostly chemical rather than the stench of gases that I learned is released by opening up decaying flesh. It was a holiday, Memorial Day, and no autopsies were being performed until the next day.

We were there for over an hour and I was surprised that I didn’t have more of a reaction to the sights I had just seen. But they were so completely out of the realm of my usual observations and they were so violent and final that I felt almost numb to alarm or discomfort.

That is until about a half an hour later when Detective Morris dropped me off at my hotel. I walked down the hallway to my room and I was shaking somewhere deep inside my own body. Jangled, I told Nick later. I felt so damn jangled. My insides were trembling while my outside appeared still and calm.

In my mind I can still see the blood encrusted face of that man, his eyes open but unseeing, with the white plastic handle of a large kitchen knife jutting out from just under his right eye. There were streaks of blackened dried blood, like streams of dark tears down his cheeks. His face seemed to be turned towards me in a frozen mask of death.

I would definitely not have made it as a Chicago cop and though I have known that for some time, it hit me then as hard as if a heavy metal wall had fallen. It made me marvel even more at Gerry’s chosen profession.

I had never flown first-class before and I’ve always been somewhat fascinated with the whole scenario surrounding boarding and getting seated on an airplane. There seems to be such a mix of emotion, tradition and superstition amongst the travelers who ascend into these airbuses for business or pleasure each day and every day at all hours. I’ve always wanted to better understand the anxieties of securing overhead luggage and the preferences for that certain seat in that certain row.

God knows I’ve got mine. Put me somewhere on the aisle with easiest access to the restroom and I’m pretty happy. I prefer an exit row with some foot room, even on the little jumps from the Bay area to San Diego and even though I’m only 5’5″ and pretty average all the way around.

First class has always held it’s own mystique. I’ve never gotten very close before, other than to travel through that different world on my way to coach, or else surreptitiously peering through those privacy-demanding curtains as I’ve stood waiting my turn for a restroom.

But now my own first-class adventure was taking place. Thanks to Nick and his many frequent flyer miles, who only said to me, “You should have the experience.” I hug him from afar for that strange and wonderful beginning to a pretty ghastly trip.

I’m forty-four and I’m a writer. That is according to the definition that is the best description of such a profession that I’ve ever heard: “Writers write.”

They are those people who feel that they have to play with words, who long to communicate to others their impressions and deepest thoughts, their imagined scenes and stories, or their most hidden dreams and most radical and blatant viewpoints.

In other words those people who just cannot shut-up. People who want to paint a picture, or play music, or create a poem, or reveal the world, or expose the bad guys or create the future. Those people are the writers. Some are more motivated than others. Some are most certainly less realistic than many. I am one of those guys.

When I first heard about this story of evil, the blood, the abuses, the danger – my nerves came more alive. What a story to tell, I thought.

Could I get close enough to the principles to experience their horrors, to know what emotions were behind their blank expressions or their trembling fingers or slightly twitching eyebrows? Could it somehow do some good for others to know?

I would never know unless I gave it a good try. I flew into Columbus, Ohio so that I could tell it from the very beginning.

Last November Lt. Montgomery had called Gerry into his office. Gerry’s partner Henry was off investigating a fellow cop on a physical abuse charge that his wife had filed. After the lieutenant told Detective Hunter to sit down on one of the well-worn chairs in front of his gray metal desk, he began to compliment her on recent achievements. What gives with the praise? she thought a bit nervously.

He finally got around to telling her that he wanted her to take a very high profile case, along with a detective from Grandview Heights. They would be investigating a cop from Columbus. This cop was the alleged perpetrator of several sexual crimes. He was a forty-eight year old sergeant who lived in Grandview Heighs, an upper middle class suburban area just outside of Columbus.

Eli Wilson had lived in Columbus before and that’s where the alleged abuses had started. But it appeared they had continued into Grandview Heights and therefore both police departments were involved in the investigation.

Gerry explained to me how this scenario seldom worked well. We were on our way to interview Kathleen, the sister-in-law of the supposedly very bad cop. First we met with Chuck Verdacci, a young looking, clean-cut guy in neat clothes, fresh short haircut and dark rimmed glasses. He climbed into Gerry’s unmarked detective car with us.

“Cops are not generally very trusting of one another at first,” Gerry told me, after we started our journey. “It takes a while to get to know another cop and feel good about working with them.”

“It’s even worse when it’s two cops from different departments,” she said, gesturing towards Chuck. “And we’re all pretty territorial. We don’t easily give our confidence to a cop from another PD. So, when I first met Chuck, I thought, ‘Oh, great. Some inexperienced young kid that they put on this so he won’t get anywhere in a case where a police supervisor is being charged.'”

I looked at Chuck’s profile in the front passenger seat then and he was smiling at this. Chuck had eleven years of experience as a law enforcement officer on the streets with four years as a detective. He was no kid.

Fortunately he and Gerry had hit it off well, unlikely as that was at the beginning.

“Defense attorneys for cops will do their damnedest to make the investigators look like bad cops,” Gerry told me, as the three of us drove to see Kathleen at work. “They’ll go after any little bit of dirt they can dig up, if you’re trying to go after a fellow cop.

“When Chuck and I first met I looked him over, and then I said, ‘I sure hope you’re squeaky clean, kid.'” She smiled over at the young-looking detective in her passenger seat.

“‘Yeah, I am,’ he told me without a second’s hesitation. ‘Are you?'” Gerry laughed and Chuck turned towards her, nodding his head and smiling more broadly now.

The elevator moved down the shaft slowly. The only passenger, an attractive woman in her early forties, pressed her body against the antique mirrored corner of the small space. Her body was trembling and a light film of perspiration shone across her forehead making her smooth skin glisten in the muted lighting of the small mirrored and dark paneled space.

Her dark brown eyes were round with shock and fear and she stared straight into the space directly in front of her as though something or someone was there. But she was alone, entirely alone.

She was a trim woman, well-manicured and dressed in a beige wool business jacket and skirt. Her lips were parted slightly. She was breathing rapidly and the fingers of her left hand gripped the heavy metal rail at the side of the car. Spattered erratically across her left sleeve and hand were heavy dark red drops of drying blood that dulled her thin gold wedding band and streaked her skin and clothes. 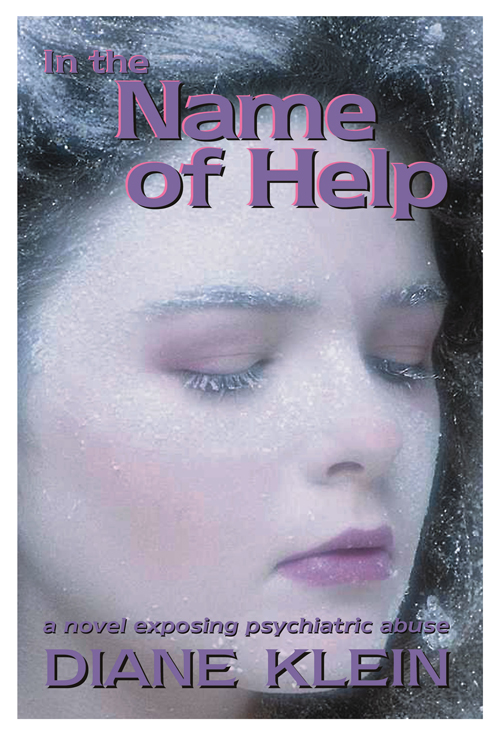